A centuries-old shop in an Istanbul back street is where Turkish delight all began. Victoria Combe eats up the atmosphere

I will be lucky if I have any teeth when I leave Istanbul. Turkish delight is my downfall, and I am tempted at each turn. Every home in Turkey has a stash of these succulent, sugary cubes, which are offered with tea and coffee, and after breakfast, lunch and dinner. The trays of dusty pink, yellow and green lokum are as much a part of Istanbul life as the imam’s dawn call.

Turkish delight must be the only sweet in the world that is so embedded in a country’s national identity. We do not think of Britain and mint humbugs or America and bubblegum, but we do think of Turkey and Turkish delight.

Intrigued by the sweet’s history, I set out to find the family responsible for my impending dental bill. Turkish delight was invented by Bekir Affendi, who came to Istanbul in 1777 from the eastern province of Anatolia. His first shop, Haci Bekir, in a narrow street close to the spice bazaar, is still owned by his descendants and run by the fifth generation of families he employed.

Bekir’s great-great-granddaughter, Hande Celalyan, is the deputy director working alongside her father, Dogan Sahin. She has fantastic teeth and an enviably slim figure. “Do you like Turkish delight?” I ask doubtfully. “Yes, we eat it at home. But just one piece at a time.” One piece is about 30 calories, but who truly stops there?

Celalyan works on the fifth floor of the branch in Istiklal Caddesi, a pedestrianised street in the heart of modern Istanbul. Above her desk is a portrait of her mother, the heir to the business, who died in her forties. Father and daughter greet my three-year-old son and chief taster, Gabriel, as if he were a prince. Like all good sweet sellers, they recognise that their most important customers are often under the age of five.

Sahin, the director, gives us two impressive offerings on arrival: a plate of golden Turkish delight rolled around whole walnuts, and a photograph of himself after swimming the Channel in 1961. He, too, looks like he never touches the stuff.

The Turkish name for the sweet comes from the Arabic rahat-ul hulkum, which means “soothe or heal the throat”. This was abbreviated to rahat lokum and then lokum. The name “Turkish delight” evolved in the 18th century when an English traveller took home some of Bekir’s produce to his relatives. He could not pronounce the Arabic name and so coined Turkish delight. It stuck like syrup.

Bekir concocted the recipe for Turkish delight in 1777 as an improvement on an old mixture of honey or molasses, water and flour. He used cornflour and the newly available refined beet sugar and developed the firm, chewy jelly. Word spread and the sultan appointed him chief confectioner to the palace.

He travelled the world, winning medals in Vienna, Cologne, Brussels and Paris for the quality of his confectionery. The medals and the sultan’s certificate line the Haci Bekir offices. The next two generations were also appointed to serve the palace.

Little has changed in 225 years. The classic flavours remain: rose, lemon, mint and mastic. But the Turks’ favourite – and the biggest seller – is a plain jelly studded with pistachios. Another winner is nuts rolled in Turkish delight and dusted with desiccated coconut.

Making Turkish delight is slow, Hande Celalyan tells me. First a slurry is made of starch and water, and then sugar is added and the mixture cooked for two hours. It is poured into wooden trays dusted with starch and left to rest for two days before being cut into squares. Some people prefer their lokum “double-cooked”, where the solution is cooked for a full four hours to give it a caramel taste and firmer texture.

“I am the fifth generation in my family to be running the business, and many of the workers in the factory and shops are also fifth generation,” says Celalyan. There are no plans to change anything. “We want to preserve things the way they have always been. It is part of Turkey’s heritage.”

There is something bewitching about the original shop, with its marble floor, floral-painted ceiling and gleaming chrome and glass counter. The original fireplace where Turkish delight was invented has been preserved and behind the brass counter stand four serious-looking Turks in white coats dishing out ladlefuls of dusty delights.

On the wall is a copy of a portrait of a big-bellied, white-bearded Bekir, who became Haci after he completed the haj, or pilgrimage, to Mecca. The original watercolour by the Maltese artist Amadeo Preziosi hangs in the Louvre in Paris and shows the old man weighing the lokum for two small children and their mother.

The family’s number one enemy is chocolate. Traditionally, Turks give lokum at all the religious festivals, but now chocolate is becoming more fashionable. They have made a small compromise by making chocolate-covered Turkish delight.

The Seker Bayram (sugar festival) marking the end of Ramadan is Haci Bekir’s peak season, when the company’s four small shops can expect to sell 10 tonnes in a day.

During the religious festivals the tradition is for the hostess to offer lokum to her guests as soon as they arrive. She passes a dainty glass dish, saying: “Let’s eat sweet. Let’s talk sweet.”

Hande Celalyan, who also speaks Russian and German, is hopeful that one of her two children will eventually take over the family business. In the meantime she exports to Japan, New Zealand, Latvia, America and Germany. “We are a boutique art. We do not want to lose the human touch. Every batch of Turkish delight is cooked with a person watching and deciding when it is ready.”

I am plotting to make some myself so I need never be without a supply of Turkish delight.

Lay a piece of muslin in an 8in/20cm square tin and dust it with cornflour. Boil the sugar, water and lemon juice in a saucepan, stirring constantly.

Mix the rosewater and cornflour in a separate bowl, then slowly add to the saucepan, stirring over a medium heat. When the mixture thickens to jelly, pour it into the tin and let it cool. Turn on to a surface dusted with icing sugar. Cut into squares and cover generously with the icing sugar. If you want to add nuts, mix them in once you’ve removed the lokum from the heat. 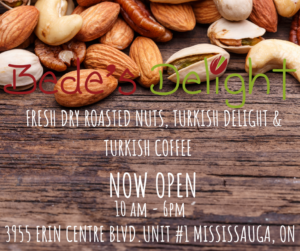